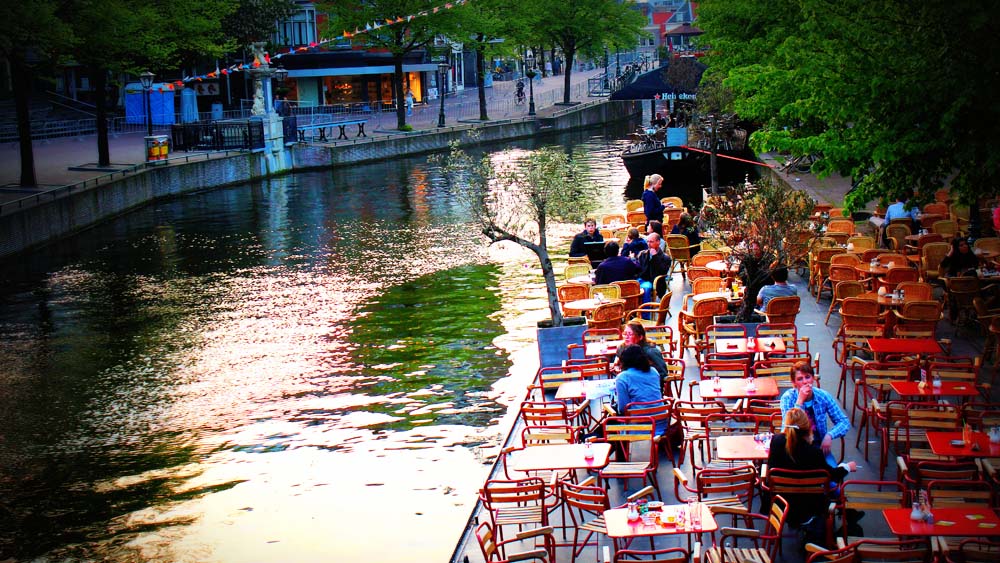 One of Europe’s most popular tourist destinations, Amsterdam is widely known for its party atmosphere, cannabis practice and the red light district. However, this capital city of the Netherlands offers so much more for all travelers such as its beautiful canal ring, historical buildings, world-class museums and famous attractions like the Anne Frank House, Vondelpark and Bloemenmarkt, the floating flower market.

Leiden is known for the oldest university in the Netherlands, the birthplace of Rembrandt and its beautiful canals. The two branches of the Old Rhine enter Leiden on the east and unite in the city center which also contains several smaller canals. The old center of Leiden is one of the largest 17th century town centers in the Netherlands, second only to Amsterdam.

The West Frisian Islands or Waddeneilanden in Dutch are a chain of islands in the North Sea off the Dutch coast. They continue further east as the German East Frisian Islands. The islands separate the North Sea from the shallow Wadden Sea, with tidal mud flats. Under the supervision of licensed guides several islands can be reached by walking on the mudflats during low tides. On the islands cycling is the most favorable means of transport.

The City Hall in Delft is a Renaissance style building on the Markt square across from the Nieuwe Kerk (New Church). Originally designed by the Dutch architect Hendrick de Keyser, it was heavily changed over the centuries and was restored in the 20th century to its Renaissance appearance.

Keukenhof Gardens is the world’s largest flower garden, and actually a promotion for the Dutch flower industry. Approximately seven million flower bulbs are planted annually in the park with not only tulips, but also hyacinths, daffodils and other spring flowers on display. The gardens are open from the last week in March to mid-May. Keukenhof is one of the most visit tourist attractions in the Netherlands.

The Hoge Veluwe National Park is one of the largest continuous nature reserves in the Netherlands, consisting of heathlands, sand dunes, and woodlands. The Kröller-Müller Museum with it large collection of paintings by Vincent van Gogh is located within the park. Bicycles are available for free to visitors of the Hoge Veluwe, with much of the area being inaccessible by car.

More than 1.000 old windmills still exist in the Netherlands. The largest concentration of Dutch windmills can be found near the village of Kinderdijk (“Children’s dike”). To drain the excess water from the polders, which are situated below sea-levels, 19 windmills were built around 1740. They have been well preserved to the present day and are now popular tourist attractions in the Netherlands.

The Rijksmuseum in Amsterdam is the largest and most prestigious museum for art and history in the Netherlands. It has a large collection of paintings from the Dutch Golden Age including works by Vermeer and Rembrandt. Until 2013, the museum is being completely renovated, but the major masterpieces are still on show.

The Vrijthof is the best-known city square in Maastricht, a city in the southern most part of the Netherlands. It features the massive Saint Servatius Church and Saint Jan’s Cathedral. The Vrijthof regularly hosts large festivals at various times throughout the year, including autumn and winter festivals.

The Delta Project or Delta Works are a series of constructions built between 1950 and 1997 in the provinces of Zeeland and South Holland to protect large areas of land from the sea. The works consist of dams, sluices, locks, dikes, and storm surge barriers. They have been declared one of the Seven Wonders of the Modern World by the American Society of Civil Engineers.

Often associated with tulips, windmills and Delft pottery, the Netherlands is more widely known by its free-spirited capital city, Amsterdam. Located in northwestern Europe, the Netherlands is a relatively small country featuring densely populated cities, picturesque villages, flat farmland crisscrossed by canals and bridges, and the Frisian Islands off the northern coast.

The Netherlands have a temperate maritime climate influenced by the North Sea and Atlantic Ocean, with cool summers and moderate winters. Daytime temperatures varies from 2°C-6°C in the winter and 17°C-20°C in the summer. Since the country is small there is little variation in climate from region to region, although the marine influences are less inland. Rainfall is distributed throughout the year with a dryer period from April to September.

Undoubtedly one of the jewels of Europe, and not just because of the stunning 17th century canals but may more.”