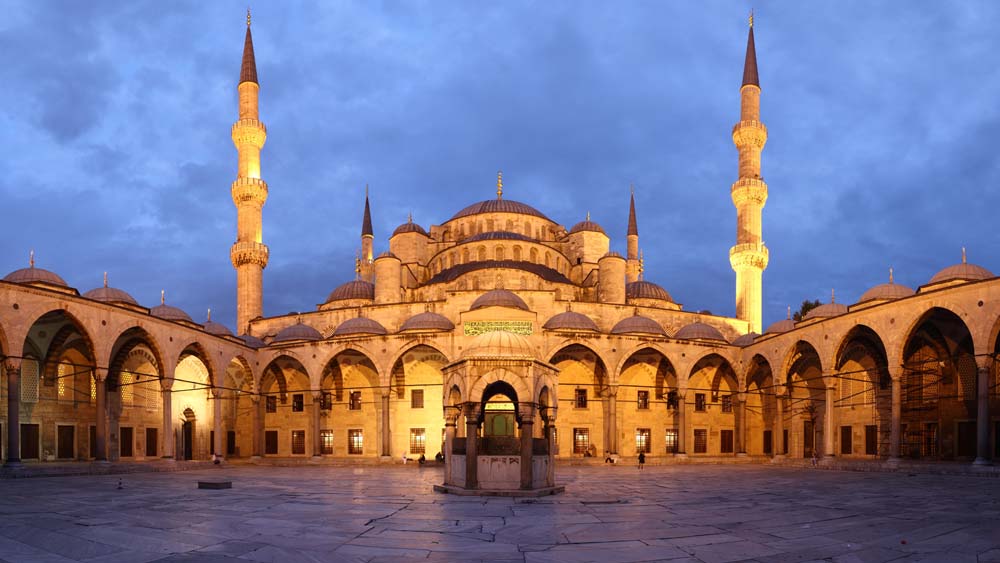 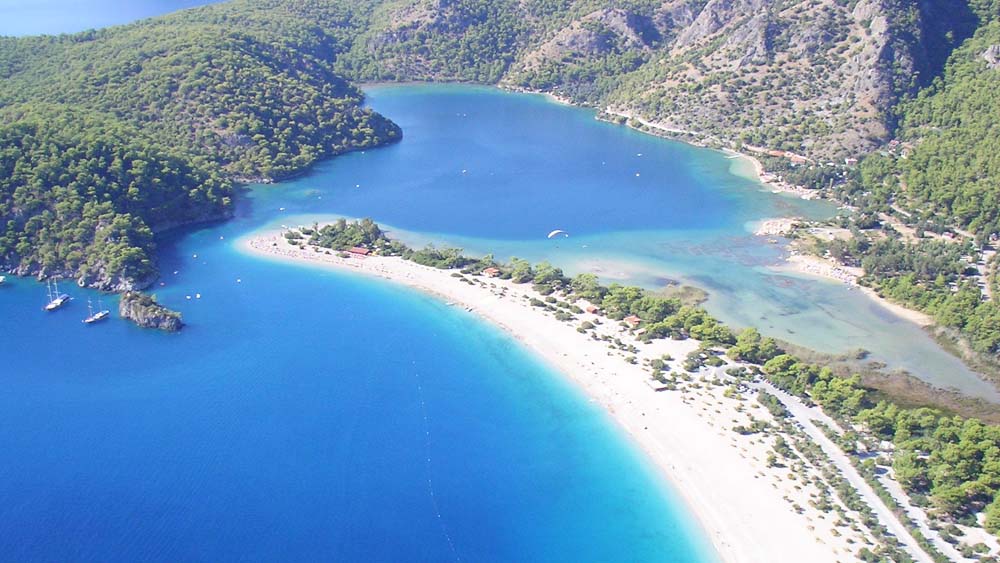 Located in Istanbul, the Hagia Sophia was originally a basilica constructed for the Eastern Roman Emperor Justinian I in the sixth century. A masterwork of Roman engineering, the massive dome (31 meters or 102 feet in diameter) covers what was for over 1000 years the largest enclosed space in the world. The church was looted by the fourth Crusaders in 1204, and became a mosque in the 15th century when The Ottomans conquered the city. The Hagia Sophia was converted into a museum in 1935 and is now one of the top attractions in Turkey.

Cappadocia is famous for its weird and wonderful natural rock formations and unique historical heritage. One of the best places to see these strange formations is the town of Göreme, which is located among a large number of tuff cones, termed fairy chimneys. The fairy chimneys have been formed as the result of wind and water erosion of two different volcanic layers: A thick layer of tuff (consolidated volcanic ash) covered by a thin layer of basalt that is more resistant to erosion. Due to the ease of carving into the tuff, many of the fairy chimneys at Cappadocia have been hollowed out over the centuries to create houses, churches and storage facilities.

The ruins of Ephesus are a popular tourist attraction on the west coast. The city of Ephesus was once famed for the Temple of Artemis, one of the seven wonders of the ancient world, which was destroyed by a mob led by the archbishop of Constantinople in 401 AD. Some of the structures can still be seen however including the Great Theater and the Library of Celsus. The library was built around 125 AD to store 12,000 scrolls and to serve as a monumental tomb for Celsus, the governor of Asia. The façade was carefully reconstructed in the 1970s to its present splendid state from the original pieces.

With its six minarets and sweeping architecture the Sultan Ahmed or Blue Mosque in Istanbul impresses from the outside. While still used as a mosque, the Blue Mosque has also become one of the most popular tourist attractions in Istanbul. It was built between 1609 and 1616 and like many other mosques contains the tomb of the founder. Inside the mosque, the high ceiling is lined with the 20,000 blue tiles with different patterns that give the mosque its popular name.

Ölüdeniz is a small village located on the south west coast on the Aegean Sea. It has a secluded sandy bay at the mouth of Ölüdeniz, on a blue lagoon. This beach is famous for its shades of turquoise and remains one of the most photographed beaches on the Mediterranean. Ölüdeniz is also regarded as one of the best places in the world to paraglide due to its unique panoramic views.

Nemrut is a 2,134 meter (7,001 ft) high mountain in southeastern Turkey, near the city of Adiyaman. In 62 BC, King Antiochus I Theos of Commagene built a tomb-sanctuary flanked by huge statues of himself, two lions, two eagles and various Greek, and Persian gods on the mountain top. Since their construction, the heads have toppled from the bodies and lay scattered throughout the site. The summit of Mount Nemrut provides a great view of the surrounding mountains. The main attraction is to watch the sunrise from the eastern terrace which give the bodyless heads a beautiful orange hue and adds to the sense of mystery of the place.

Located in the city of Bodrum in southwest Turkey, Bodrum Castle was built by the Crusaders in the 15th century as the Castle of St. Peter. It is one of the world’s best preserved monuments dating back to medieval times. The castle now operates as a museum, with the focus on the Museum of Underwater Archaeology. It overlooks the internal marina of Bodrum filled with millions of dollars worth of sailing crafts.

Pamukkale, meaning “cotton castle” in Turkish, is an unreal landscape in western Turkey, famous for its white terraces. The terraces are made of travertine, a sedimentary rock deposited by water with a very high mineral content from the hot springs. People have bathed in its pools for thousands of years. The ancient Greek city of Hierapolis was built on top of the hot springs by the kings of Pergamon. The ruins of the baths, temples and other Greek monuments can be seen at the site.

At 14 kilometers (9 miles), Patara is one of the longest stretches of sandy beach found anywhere in the Mediterranean. The beach is backed only by ancient Lycian and Roman ruins and swooping dunes with no buildings visible except of a small café. Patara Beach is also the breeding ground of the endangered Loggerhead turtle. The nearby village of Patara was the birthplace of St Nicholas, the 4th-century Byzantine bishop who later passed into legend as Santa Claus.

Aspendos boasts one of the best preserved ancient theatres of antiquity. The theatre of Aspendos was build in 155 AD during the rule of the Roman Emperor Marcus Aurelius and could seat between 15,000 and 20,000 spectators. Because the stage area was later used as a caravanserai (a roadside inn) in Seljuk times, it was continuously repaired and maintained. Thus, the Aspendos Theatre has been able to survive to this days without losing almost any of its original qualities.

Turkey is a country of many marvels. From its incredible landscapes to geological wonders, ancient sites and bustling cities that are teeming in vibrant culture, colorful bazaars, tantalizing cuisine and friendly people, Turkey is a unique place that has beckoned to the senses from the earliest of civilizations. Linking western Asia to southeastern Europe across the Turkish Straits, Turkey is a large country that is home to some of the world’s most beautiful and bizarre landscapes that range from spectacular Mediterranean beaches to majestic snowy mountains, verdant hills and steppe formations.

Although Turkey is situated in a geographical location where climatic conditions are quite temperate, there are significant differences in climatic conditions from one region to the other. While the coastal regions enjoy milder climates, the inland Anatolia plateau experiences a dryer climate with hot summers and cold winters with limited rainfall.

Turkey offers a wealth of different kinds of destinations to travelers. From the dome and minaret filled skyline of Istanbul to the Roman ruins along the western and southern coasts, from the beaches of Antalya and the Mediterranean seaside resorts to the misty mountains of Eastern Black Sea.”