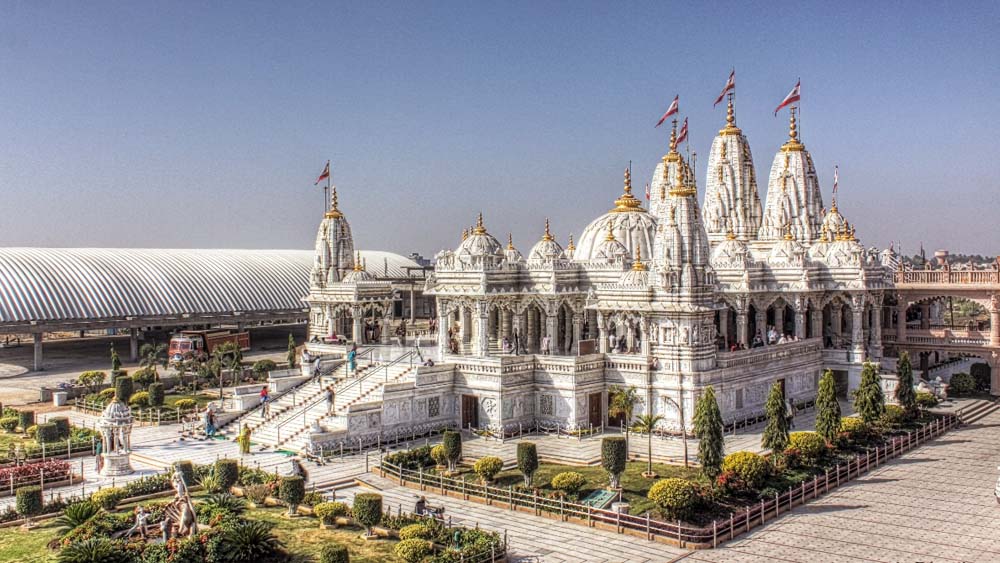 Ahmedabad is regarded as the largest city in Gujarat is closely associated with Mohandas Karamchand Gandhi. The city is popular as the Manchester of the East as it is famous for its textile mills. The tombs of Ahmed Shah and his queens, Ahmed Shah's Mosque, Jama Masjid, Mosque of Sidi Sayid, Teen Darwaza or Triple Gateway are major monuments. The place has a number of gardens such as Victoria Garden, Bal Vatika and Law Garden.

Saputara is a popular well-planned hill station. Saputara is popular for the several gardens present here like Lake Garden, Step Garden and Rose Garden. There are facilities for visitors to stay here in the numerous Forest Huts. One of the popular attractions here is the Saputara Lake that abode several boat clubs, offering facilities for boating. The Vansda National Park consists of animals like tigers, leopards, python, four horned antelope, pangolin, rusty spotted cats and even giant squirrels.

Somnath or Pattan Somnath is located in the Prabhas Kshetra near Veraval in Saurashtra, on the western coast of the State of Gujarat. The temple of Somnath is one of the holiest pilgrimage spots for Hindus and is visited by pilgrims all round the year. Tourists also pay a visit to the Museum that depicts the historical and cultural ethnicity of the temple town of Somnath.

Located on the tip of the Saurashtra peninsula on the Arabian Sea, Dwarka was once referred to as the Golden City. Present-day Dwarka sits on the right side of the river banks of the Gomati. Dwarka is a renowned historical and religious site and has the Dwarkadheesh Temple or Jagat Temple. Nageshwar Mahadev, Rukmini Temple, Bhalka Tirth, Gomati Ghat Temples, etc. are some other popular pilgrim spots in Dwarka.

Sasan Gir or the Gir Forest National Park is the only place where Asiatic Lions can be found. It is home to 400 species of flora and 2375 species of fauna. Another important attraction in the place is Kamleshwar Dam. This dam is built over Hiran River, which is one of the seven rivers that drain in the area of Gir Sanctuary.

The Kaba Gandhi No Delo, Mahatma Gandhi's childhood residence, which has now been converted in to a memorial called ‘Gandhi Smriti’. Some of the places to visit in Rajkot are the Aaji Dam, the Race course, the Rotary Dolls Museum, the Watson Museum and the Lang Library. Rajkot is also famous for its traditional sweets and dandiya and garba dances.

Bhavnagar is known as the city of culture and education. The city is also a major stopover for tourists visiting places like Blackbuck National Park at Velavadar and Jain temples at Palitana. The destination is also home to a number of important tourist places like Takhteshwar temple, Gangajalia temple that is dedicated to Ganga-devi and Town Hall that was formerly a ‘Durbar Hall’, Barton Library that houses a museum and Nilambag Palace. Tourists can also visit the nearby Gopnath Beach, which houses limestone cliffs, Talja temple and various birds.

The city is famous for its Hindu temples, palaces and wooden pavilions. Bhuj is also home to the oldest museum of Gujarat. It is also known for its enamel work done on gold and silver jewellery, seashell toys, lacquered wood and metal bells. Bhuj also has many historic monuments and structures like the Bhujia Fortress, the Aina Mahal, Kachchh Museum, Bhartiya Sanskruti Darshan, Prag Mahal, Kakkad Bhit Yaksha, and Swaminarayan Temple.

This district of Gujarat brings to mind a unique landscape with salty marshlands and no vegetation. Situated on the Gulf of Kutch, leading to the Arabian Sea, it is also known as the Rann of Kutch. Tourism activities here involve desert safaris by jeep, camel rides, shopping for the unique local handicrafts, and sighting the rare wild ass found in the Little Rann of Kutch sanctuary. The embroidered garments with mirror-work and the camel wool shawls from here are extremely famous.

Dasada/Bajana is located on the edge of little Rann of Kutch, which is an extension of the Rann of Kutch onto Saurashtra, popular for bird watching and only place in India where wild ass can be found. There are several bird watching sites around the area. Lesser Flamingoes are found here in winter in large numbers. Besides bird watching tribal heritage of the area, craft villages and rural character is an attraction for guests looking for an authentic rural India experience.

The Velavadar National Park at Velavadar, also known as Blackbuck National Park, is spread over an area of 34.08 sq km. Flat land, dry grasses and herds of antelope are the major attractions of this park. It has a unique grassland ecosystem and has been running a number of successful conservation programmes for species such as the blackbuck, wolf and lesser florican. Many species of migratory birds include three species of harriers, lesser floricans, eagles, waders and other water birds arrive to spend the winter here.

Lothal is one of the most prominent cities of the ancient Indus valley civilisation. Lothal's dock is the world's oldest dock. Archaeologists unearthed trenches sunk on the northern, eastern and western flanks of the mound, bringing to light the inlet channels and nullah connecting the dock with the river. The findings consist of a mound, a township, a marketplace, and the dock. Adjacent to the excavated areas stands the Archaeological Museum, where some of the most prominent collections of Indus-era antiquities in India are displayed.

Wandering among the hundreds of fishing-boats, a walk on Veraval's picturesque dockyard and long uninterrupted shorelines is a lovely experience. A large coastal industrial center, Veraval is known for its fisheries, dominated by the Kharwa fisherfolk and as the gateway to Somnath. Fishing here is done by trawlers, as well as by traditional boats, and Veraval maintains a boatbuilding industry that still constructs and repairs boats with traditional methods.

In Gujarat you will discover centuries of history as spanning the geological core of the earth onto a fascinatingly vibrant future. Gujarat is unique in its geological and topographical landscape. Ancient cave paintings to historic murals, natural and man made caves. Art, history, music, culture, all dovetail within each other to form a wondrous matrix that is the cultural exuberance of the people of the state.

From volcanic outpourings through bedrock to fossil fields of indegenous dinosaurs; from the art of the neolithic cave painter to the stone masterpieces of a series of civilized architecture. Gujarat has it all.”